Since 1960, Youngstown has seen a net loss of 56% of its population. When Youngstown Sheet & Tube’s Campbell Works and Brier Hill Works abruptly closed in the late 1970s, followed into the middle 1980s by shuttering of other steel plants, Youngstown suffered a loss of 50,000 manufacturing jobs in a very short amount of time.

When large industries close down, tens of thousands of residents are unable to keep up with their mortgage payments, and the housing market becomes glutted — making it as difficult to sell a house as it is to find a new job. Unable to pay their mortgages, unable to sell their homes, and forced to move in search of work, tens of thousands lost their homes. More recently, sub-prime lending leading to mortgage foreclosures resulted in even more losses of homes throughout our region. This problem has been compounded even more since 2000, when Ohio has seen the worst job losses since the Great Depression.

As a result of these factors, there are currently approximately 4,000 vacant structures and more than 20,000 vacant lots in Youngstown. 43.7% of all parcels within the city have some level of vacancy, resulting in the highest vacancy rate per capita in the US.

This project documents the locations where houses have been demolished by the City of Youngstown, as part of the multi-year program to “Right Size” the city. The information of the locations is based off of a public records request that I filed for the locations of the 3,000 abandoned houses that have been razed over the previous seven years. 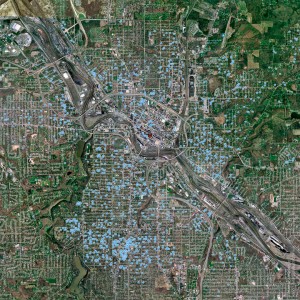 Youngstown, OH
Photographs of the sites where 1,300 abandoned houses were demolished from 2007-2014 (illustrated by the blue houses on the map). For exhibition, 100-200 are selected and arranged as a grid.